No Result
View All Result

Originally from the suburbs of Melbourne, Australia, Madeleine Wood is a Recording​ ​Artist​, ​Feature​ ​Vocalist​, and self-described​ ​F*cking​ ​Nice​ ​Person​.​ Three years ago she packed her life into a suitcase and moved to the UK. She is now settled in London, which feels just as much like home as her native Melbourne. Surrounded by music from an early age, Wood put her first band together at 17 and has been making a career out of singing, writing and performing ever since. She has toured with EVE as her support act and sang live at Intents Festival in the Netherlands to 50k people. Recently, Gamla Stan, a track she performed on with Kyau & Albert, and Francesco Sambero, was Tune of the Week on Armin Van Buuren’s radio show ASOT.

Below we find out about the crazy amount of musical talent in her family and why she would like to work with Pharrell Williams.

Age four is the first memory I have of music and the magical powers of music. I come from a really huge family and everyone is musical. There isn’t one person in my family or extended family who doesn’t play an instrument or sing. All my cousins sing, and my aunties too – from opera to jazz to classical through to musical theatre. Some sing professionally, others teach, a few sing just for fun, and others keep their voices for church choir only. Even my Grandma and Grandad are strong singers. You should hear us at Christmas time huddled around the piano singing Christmas carols. We get eight part harmonies going on! #squadgoals. So I guess my environment growing up played a huge role in inspiring me to sing.

To keep it simple, my ultimate goal is to be on tour with a band and creative team as a support act for major artists. I want to be on the road and constantly on the move.

I’ve got a collaboration with Royce&Tan over in Canada coming out at the start of 2018. We are in the final stages of finishing the project. Earlier this year I sang on a pretty major video game, set to be released for the Christmas period. I saw an advertisement for the game just last week. Secretly I am dying to hear and see the end result. I’m working on my solo material at the moment too, with a production team from Portugal. Together we have been developing my sound and I aim to showcase three tracks around Feb 2018.

When preparing for the studio I like to warm up slowly by doing 20 minutes of vocal exercises on and off throughout the day so my voice warms up naturally. If it’s a morning studio session I usually get up really early to warm up the pipes as slowly as possible. I also meditate and work out. Body/mind/soul yo!

If I have been given a finished piece of music to write a topline to I will pop the song on my ipod, (yes I still use an ipod!), and listen to the song over and over until I have listened to every instrument/sound and followed its pattern throughout the song. This way when I get to writing the melody and lyric my mind is already full of ideas inspired by what the producer has created. Sometimes the whole topline comes to me in one session. If not, I find it most beneficial to open the project and write in small increments working on it on & off. I find that working like this gets a better final result rather than forcing myself to write when the creative juices just aren’t flowing. It’s often when I’m not in a session that the breakthrough moments happen.

If I have to choose, Love at First Sight. A collaboration with Canadian duo Royce&Tan. The track is a cover of the Kylie Minogue original but our version is very different. Royce&Tan were super excited when they came across my Soundcloud page. As I recall they said they were just about to give up on finding a vocalist for the project. Then I came along! Hah! People have always compared my voice to Kylie’s so for me, I was eager to see how my performance compared.

Pharrell Williams. He is a very spiritually awake person. I like his energy and think that his studio vibe would be MEGA inspiring. I’d like to witness, be involved and experience him at work. Plus, his musical knowledge is ginormous. He has covered so many different genres and is responsible for a string of commercially successful chart-topping songs. His production style doesn’t age – it’s timeless.

Right now I am inspired by Claudio. I first found out about Rachel Claudio’s work when I stumbled across her TedTalk ‘How to translate the feeling into sound’. She is a modern day ’one man band’ using a live looping setup, she creates a song from scratch right in front of her audience. Claudio’s vocals take it to another level. Her voice is sweet but raspy with soft tones and powerful outbursts. 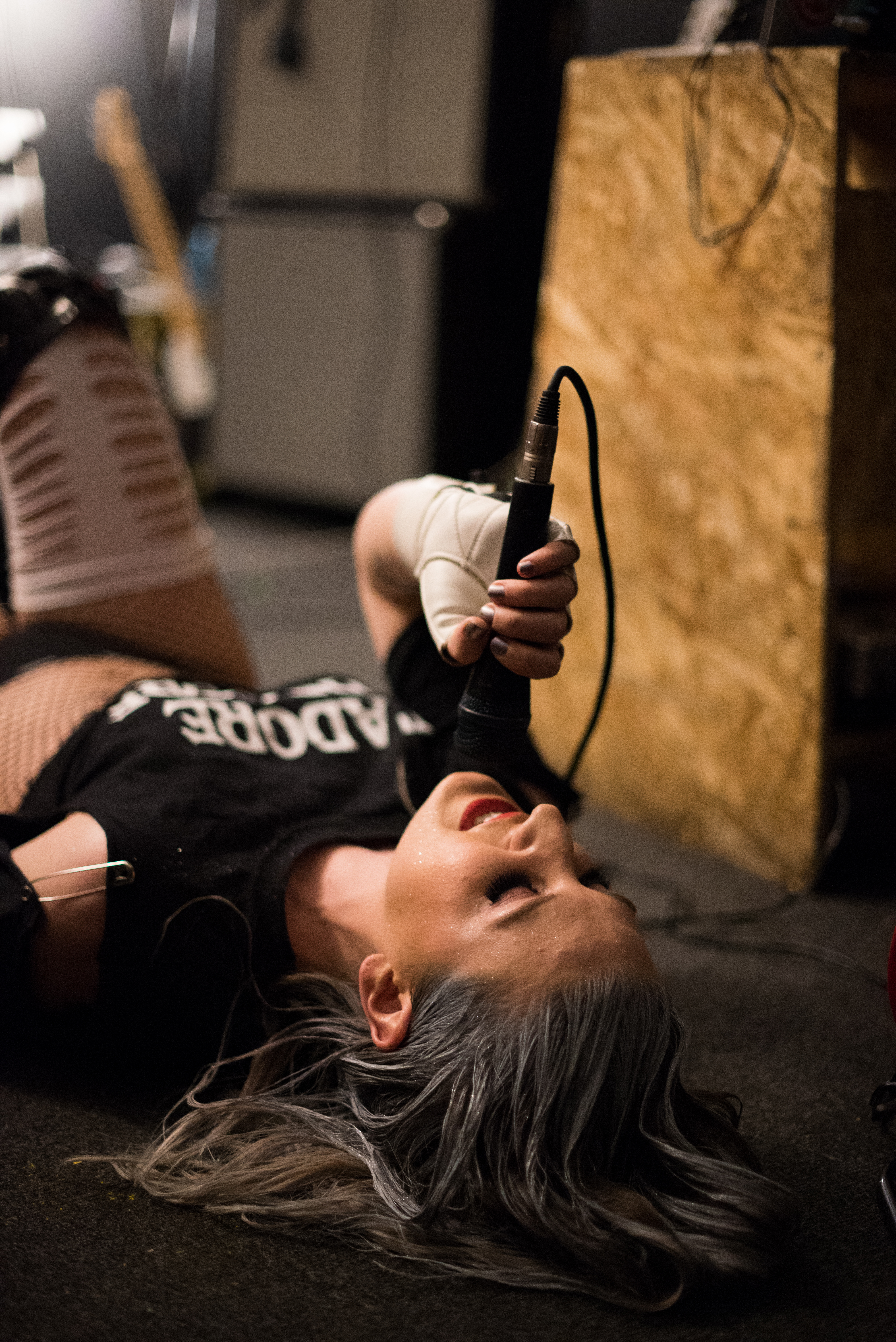 Technical genius – Celine Dion. (There is nothing this woman can’t do).

In no particular order :

Bring It Back by Moloko

Confessions (the whole album) by Madonna

When I Come Around by Green Day

Sunday Morning by No Doubt

Back To Black (the whole album) by Amy Winehouse

I have a very basic setup, good enough for demo vocals. Rode NT1 mic is my baby and I am a GarageBand & Cubase kind of girl. When it comes to tracking final vocals for projects there are four studios in London I like to use. I live in a warehouse style environment and our building used to be an old printing factory. Lots of big open spaces and very thin walls so soundproofing is an issue which is why I record final vocals in professional studios instead. In saying that, I have just ordered the Kaotica Eyeball. Apparently it is wicked for recording vocals no matter what your environment is. Keen to see if it works in my loud household!

Word of mouth, lots of partying and networking.

I certainly have. I am now really good mates with two separate production teams I originally met through Vocalizr. I join them on tour and perform our collaborations live. If it wasn’t for Vocalizr I would never have made Tune Of The Week on ASOT or performed to over 50k people in the Netherlands.

Sparkling Water. I am such a water snob. I only like sparkling water! 50+ spf sunscreen. (I even wear sunscreen in winter!) My pillow. (I have top of the range pillows and I need my own pillows to get a good night’s sleep). Omg I sound so practical and boring !

“Southpaw singer” Shayna on the importance for singers to learn how to engineer their own vocals in the new age of the Music Industry.

No Result
View All Result